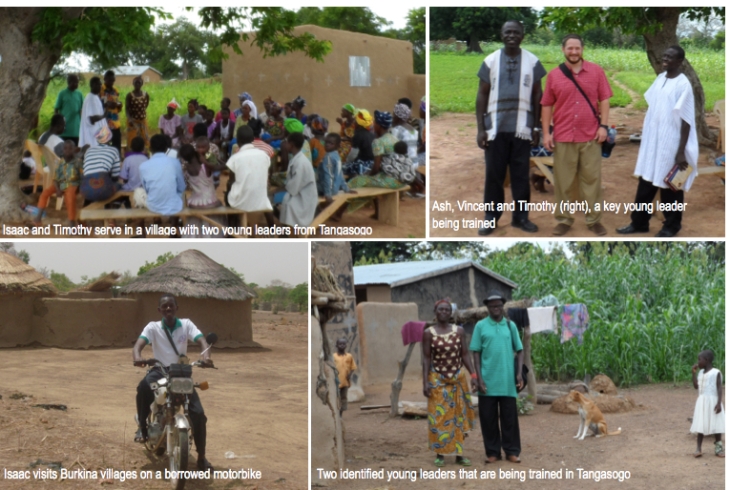 YLI Coach Isaac Gyesaw has been with YLI since 2002. Ever since I met Isaac he has been discipling young people in Ghana’s more developed and Christianized city, Kumasi. Over the years he has met with numerous young leaders for discipleship and taught as many YLI conferences as anyone else in our ministry.  But the many small unreached ethnic groups in Ghana’s north have long been a burden on Isaac’s heart.

A man named Timothy from Paga, one of Ghana’s most northern towns, contacted Isaac earlier this year for help with five churches across the border in Burkina Faso that had collapsed after the evangelist who started the churches moved on.  Because of his YLI training, Isaac knew that the reason these small Christian communities were not surviving on their own, much less taking the gospel to other villages, was that discipleship never happened there.  No one had trained leaders in the communities.

The reasons were the familiar challenges that often prevent village leaders from being adequately trained: an uneducated, illiterate people with no resources and poor transportation.

Isaac began to travel the 14 hours to Paga to begin training Timothy and others who would then train and disciple others in these villages.

Unlike the typical paternalistic approach shown to village churches, Isaac has a vision that each of the five churches will have locally trained leaders who lead the churches into becoming beacons of Christ to the surrounding areas, rather than perpetual spiritual receivers dependent on outsiders.

In August, I traveled with Isaac and Timothy across the unmonitored border via dirt road to the village of Tangasogo, in Burkina Faso, to see for myself how discipleship is taking root in the area.  Although there is still much work to be done, young leaders from these Burkina villages have been identified and are being trained by Timothy and Isaac.

Please pray with us that these five churches will grow to maturity and become an active part of God’s work to spread his Kingdom to surrounding villages that desperately need to know the love of Christ.