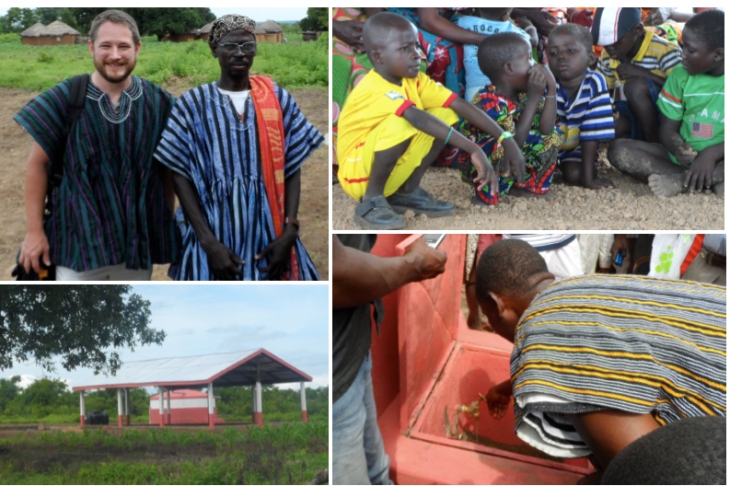 The village of Chaagbuni, Ash with Dokugiku, children who will benefit from clean water and the gospel in Chaagbuni, testing the new clean water, the Chaagbuni water project.

Dokugiku from Chaagbuni is a sub-chief in his village.  Years ago, he converted to Islam and brought Muslim teachers from Tamale to Chaagbuni to instruct the people and build a mosque.  His vision was that the whole village would become an observant Muslim community, but he was disappointed by the lack of care that Muslims from the city showed to Chaagbuni.

In 2011, Dokugiku took part in the water project celebration that we held in Komlanyili.  He was struck by the love that he saw in the lives of Christians, compared to the neglect they felt from outside Muslims.

However, he was also conflicted.  How could he credibly invite Christians to Chaagbuni after working so hard to establish Islam?

After talking with his chief, Dokugiku invited YLI-trained leaders to come and visit their village.  The leaders began to explain the gospel, teaching from the Bible, and soon there was a vigorous discussion throughout the village.

This year we completed the first phase of a water project in Chaagbuni.  At the dedication, a Muslim man asked publicly how they could allow their families to come and get water at “this Christian thing.”

Through a translator I explained to this man and the rest of the community that the clean water is a gift from God and that God loves all people: Christian, Muslim, and pagan alike.  Our desire is that all the people of Chaagbuni will benefit from the clean water and experience God’s love.

Through YLI trained leaders who have faithfully lived out the love of God, Dokugiku and others in Chaagbuni have received not just clean water, but salvation, and they are now on the journey of learning what it means to be disciples of Jesus.