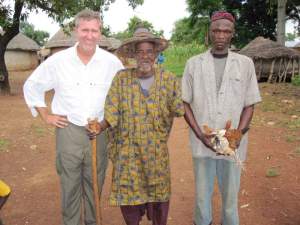 I am writing this update as we begin the YLI coaches conference in Tamale, located in North Central Ghana and referred to as the Muslim capital of the country. Today is Thursday, our seventh day in Ghana.  There are several spirited games of Jenga and Connect 4 taking place as I write; (almost as if to say, “Jim Moye was here!”).

Ghanaian leaders who have received YLI training and mentorship are introducing unbelievers to Jesus Christ through relational evangelism (loving and serving their neighbors), and are encouraging believers to go deep with Christ through listening to God and discipleship.  I will provide you with one example.

In the village of Moseaso we met with a vibrant group of over 100 villagers comprised of every church denomination.  Each person at the rally introduced us to either the person he or she is discipling, or the person who is discipling them.  The joy in the room as we praised the Lord was heartwarming.

After the rally we were invited to the house of a man named James who is being drawn to Christ, in large part because of the relational evangelism of Dominic, a believer who befriended him when no one else dared.  James is the son and helper of a fetish priest and has been in bondage to dark spiritual forces his entire life.

James was at the rally. At the beginning of the rally I could see the pain in his face.  Later in the day when we prayed with him, his countenance began to brighten.  Jesus is breaking the bondage of spiritual darkness in his life. Dominic is the “hands and feet” of Jesus in James ‘ life.

Interestingly, none of the people in Moseaso knew Jim.  The invitation for YLI to do a conference in Moseaso came after Jim’s death.   Although the people in Moseaso did not know Jim, they do now know the importance of love evangelism and going deep with Jesus through listening to God and discipleship. They have learned these transformational principles because of the efforts of YLI coaches like Isaac, Naomi and Esther.

Here are some other photos of Mike from this week.