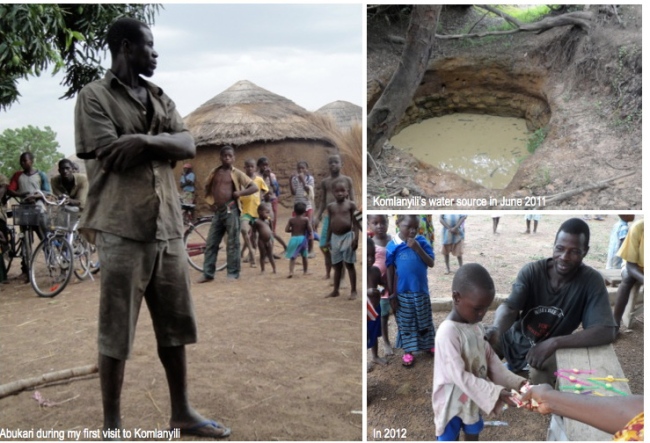 I wasn’t introduced to Abukari the first time I visited Komlanyili, but I couldn’t help noticing him. His imposing presence stood between us and the children of the village. His protectiveness was understandable–as far as I know, we were the first non-Africans to visit their village.

Komlanyili’s chief had invited us to come after seeing the impact the gospel was making in the neighboring village of Kpenchila.  YLI coach Adam Brown spent four months explaining the gospel in Komlanyili, and God provided the funds through my church for a water project (Komlanyili had the most repulsive source of water I have seen to this day).  After the completion of the water project, the new Christians in Komlanyili began to meet for worship under the water project’s shed.

Abukari did not attend the church in those early days, but his wife was one of the first to become a Christian and was being trained as a leader of the church.

On my second trip to the village, I saw Abukari with the Christians, but not his wife. I was told that Abukari’s wife had suddenly gotten sick and died. Abukari stood there in the church, somehow less imposing in his suffering, with a new tenderness in his eyes. I learned that through the death of his wife, he had come to Christ.

By my third visit, Abukari had ascended into a natural leadership role. It was an amazing transformation to see this tall, stern defender of his village becoming a disciple of Jesus and a leader. Counter to tradition for men in his culture, he stooped to kneel and serve the children with us. The love of God was clearly at work in his life.

Today, my friend Abukari is being trained for leadership by Mumuny and Baku from Kpenchila.  He is still very young in the faith and has many needs, as do all of the people in Komlanyili.  Please pray for him and all of our leaders in northern Ghana who are taking the gospel to unreached people.